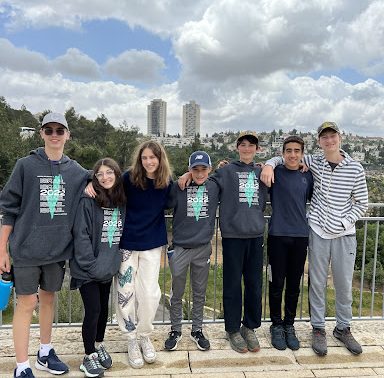 The first thing we did on Friday morning was go to Yad Vashem, the Israeli Holocaust Museum. Before we arrived, Yoav talked to us about the meaning of the museum’s name. It translates to “a hand and a Name,” which we took to mean that the museum’s goal is to make every victim a person, and memorialize them. On the bus, we also learned about the law of return, which was the first law established when Israel declared independence. This law that allows Jewish people to make Aliyah and get full Israeli rights immediately. The law is also open to any of the ancestors of the righteous among the nations, those who helped hide or save Jewish families during the Shoah. Recently, this law has been enacted for maybe the first time, because of the immigration of family’s – both Jewish and not— from Ukraine.

When we arrived at the museum, we put on the headphones to be able to hear our instructor loud and clear, and. Then we got started. We learned about the timeline of the Holocaust – beginning with the rise of antisemitism and Hitler’s rise to power; family’s stories; and what happened to certain people. It was very moving for both of us because we were able to hear and witness the harshness of the Holocaust first hand in a beautiful museum. 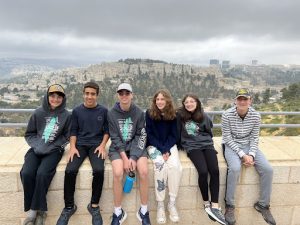 After that, we went to go get lunch at Machne Yehuda, the shuk in Jerusalem. We received a card that allowed us to get a meal at a certain restaurant of our choice. Personally, I ate wings at the shuk. We spent the rest of our time shopping for souvenirs and also bought snacks for our Shabbat Oneg.

After spending time at the Shuk, we walked back to the hotel, and got ready for Shabbat at the Kotel. Before Shabbat, we had to say להתראוֹת to Dvir. We’re so glad that he was able to be with us for the week, and so are all of the Beyachad kids. Whenever we count-off, we still all yell 35 (his number in the count-off)! 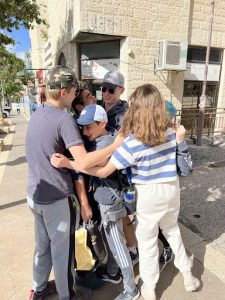 We were excited because Shabbat at the Kotel is more meaningful and encouraging than a normal Tefillah. We had a Kabbalat Shabbat service at the same place where we had Tefillah on Thursday before we headed down to the most famous part of the Kotel. Even though the boys and girls were separated, we all had a ton of fun making friends with other people who were davening, dancing, and welcoming Shabbat. The Beyachad group loves a dance circle! It’s was super fun to sing at the Kotel. When we came back from the Kotel, we had dinner and then an oneg at the hotel. Everyone, including the chaperones, had to buy something to contribute to the oneg. We had candy, good food, and even Marzipan. But there was a surprise… A few kids including me (Gavi) and Maks pooled our money together bought a full fish from the Shuk and brought it to the oneg. It caught everyone off guard and made many people laugh. It was definitely the most creative contribution to the oneg!

On Saturday morning we had the opportunity to choose which synagogue we wanted to go to an Ashkenazi, Sephardic, and Italian synagogue for services. It was really an interesting experience to be able to daven in synagogues so different from our own. Even though there were differences, there were also similarities. After lunch, we had some down time before we had more visitation time. A lot of us headed to the park with footballs and basketballs while others stayed back at the hotel to play cards and hang out.

Later, we had Havdalah and got our phones back and I immediately checked the Schechter Instagram (follow it!). Then we went shopping at the First Train Station Mall, an outdoor shopping center in Jerusalem. A lot of us got dinner at the mall; and I (Maks) had a burger. The shop owner told me if I brought friends I could get free things, so I brought a lot of Beyachad people back with us and I got a lot of popcorn. The mall was having a “boogie party” that started right as we were leaving, but we still got in a good Macarena before getting back on the bus! 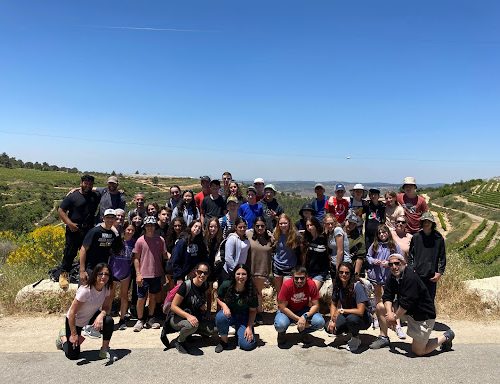 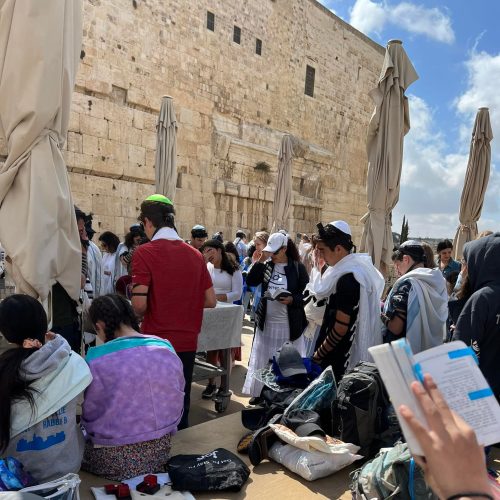 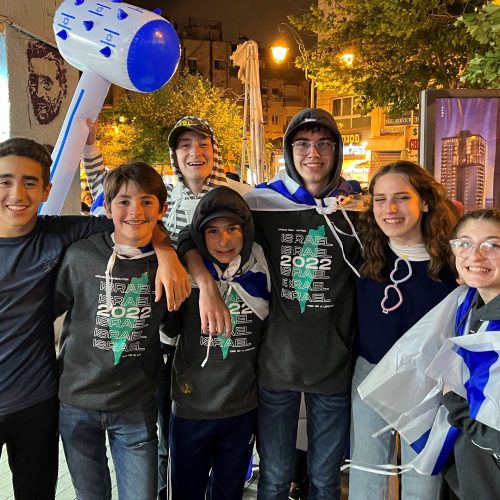